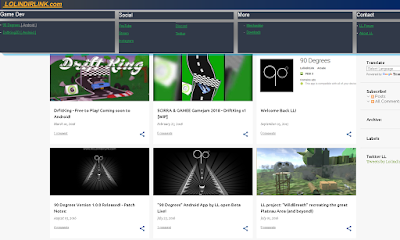 So getting my website to run smoothly on most devices has been fiddly, to say the least.
I use Adobe Muse for the most part, but unfortunately, it's very buggy.
So instead, i'll rely on other services like Google's Blogger (right here) to fix the homepage content dynamically. It kind of wroks, but not all pages link back to LL.com so that's a drawback.
Going to fix a couple things here and there, and then move on again, for now.

Here we go again!
2 years after initial release, (and originally intended as a short-span project)
Another "Big" update for 90 degrees has been published!
The "Big part here was a familiar occurence..
Long story short: Cocoon.io was my main "Html>Android" converter.
It's limited to 2 small projects, it's service sometimes took 1 hour, it had MAJOR blackscreen problems on multiple tested Android devices, And to make things worse, the 1 hour export would often fail completely.
I tried multiple alternatives, installed the whole 30+GB Google Play repo.
But they all took too long for each export, and were prone to fail, With different errors each time as well. not good!
I then settled with Adobe's PhoneGap!
After setting the XML file up, it's a breeze! really fast, super reliable! AND auto-sign which i've done manually for over 6 years now! (This required a conversion of my Google Play security key which shouldn't be possible. But apparently it is. i now have a duplicate Signing key with a different extension but Google play accepts it as the original 6+ years old signing key! Miracles!

All above trouble was to update 90 Degrees to Google's new Android 26+ Api.
I've also added 5 new player skins, 2 "Big" (retro-inspired) levels, replaced all text files (New strange bugs since using PhoneGap), Replaced the Google play achievements, login, and Leaderboards.
Relaunched 90 Degrees as a single-time payment Game (It's worth it after months of work!).
Contact me personally if you want 90 Degrees for free. Don't forget to send a referrel link!

So, i'm ready to publish new Android games!
Wait, DriftKing 2D still has many of the cocoon.io export bugs, has been updated (but not yet published) for a long while. And it's free and totally broken at this point.
It's not looking good next to 90 Degrees, which probably hurt sales right now.
I'm thinking about unpublishing the game completely as i don't really feel like expanding upon it as originally planned.

This will however result in only 1 published game which is also not the intention.
I'll come back at this problem.
I'll probably clean it up as fast as possible. But i really want to move on!

Next up: "Project TrainTrip"!
I managed to save 86,- and paid off the Steam Direct payment fee for a single game upload!
Traintrip is still far from finished but it's one check down!
It was originally planned for a Steam wintersale 2018 release, but will move to a future sale instead.
Stay tuned for more updates! I'll soon have something new to mention!


I'll keep this long-overdue post short for now.
It's basically another distraction at the moment..
And i really need to align stuff up. I may actually do schaduled content after all..
Time will tell. remind me to post the next update please! 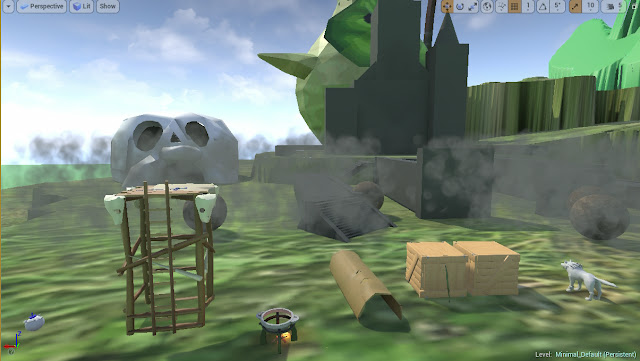 PROJECT: "WILDBREATH" by LL "[BETA WIP] unreal Engine 4 snapshot (Collecting assets!) LL" " C4D snapshot (this is where i started, creating parts of "The Great Plateau" to basic scale)" i started in Boujou, motion-tracked a few scenes from youtube footage and imported them into C4D. as well as the map image of the great plateau and a almost-full-world map around it. i bumped the terrain up to a repective height on some key places and worked from there on giving it a more similar feel and structure. adding the simple placeholder trees worked like a charm for adding some color, as well as a basic Temple of time model (I want to replace it soon for a real Version1 to be used in the UE4) "C4D "Great Plateau and beyond!" model sample by LL" A video posted by LolindirLink (@lolindirlink) on Jun 21, 2016 at 1:22am PDT "Current Link model ripped from Skyward Sword, to be used in the UE4 as

Just A Few renders for now  All of these renders are new assets for "DriftKing 2D" These took quite a long time to render! Poor little laptop.. It held up well. Doing renders as of speaking! Dynamic Window Scaling in DriftKing 2D! A New Car (Nr.3) With a 4th car coming soon! Plains, Forest, Desert, Tundra The Desert Biome "DriftKing 2D Currency" A ClipBoard Icon A Stack of "DriftKing 2D Currency" LL Logo 2019 [Work in progress]